Thirty years ago on December 18th, one of history’s great figures, Dorothy Molter, left this world. Perhaps Dorothy wasn’t considered a “great” figure to the majority of the world, or even a significant proportion of it, but her impact on the Ely Area, its residents and the thousands of annual visitors who she interacted with was profound.

Although she was born in Arnold, PA and lived in Chicago, Illinois for many years, Molter became a distinguished woman in Minnesota history – specifically, northeastern Minnesota history becoming one of the most well-known residents of Ely, Minnesota.

In some ways, Dorothy was a woman “ahead of her time” in the choices she made. She graduated high school and went on to complete nursing school during the height of the Great Depression. After visiting a fishing resort on the Canadian Border of 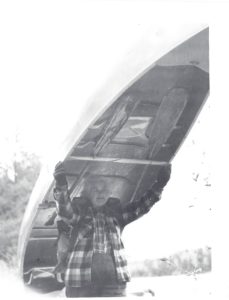 Minnesota’s wilderness, she ended up working at it for long periods of time doing physical labor, ultimately becoming the owner of the property and resort. Additionally, Molter never married nor did she ever have children.

These choices may not seem out of the ordinary for women today but considering these choices were made in the face of standard societal expectations for women to do the opposite speak volumes for the independent woman Dorothy was.

However, her notoriety is not just about the fact that Dorothy was a woman. Her choices in life, accomplishments and challenges met are a strong message about independence and perseverance in the face of adversity to all those who choose to listen to her story, regardless of her gender. However, the fact that she was a woman is important for many reasons, including those aforementioned.

Although social and political changes were in motion during Dorothy’s formative years (women’s suffrage, the “roaring twenties,” WWII), it still took a determined and confident personality to “go against the grain” and do so without a care for what others thought of them – as it still does today.

Not only does this time of year mark the 30th anniversary of Dorothy’s passing, it also marks the anniversary of the memorial snowmobile ride up to Knife Lake on January 10, 1987, which drew between 500 and 1,000 attendants, as well as the idea that snowballed into the Dorothy Molter Museum that exists today.

The staff, board and volunteers of the Dorothy Molter Museum, would like to thank each and every person who has been a part of keeping Dorothy’s story alive for the past 30 years. They look forward to your help continuing to share her legacy for the next 30 years and beyond.

To further celebrate the life of Dorothy and the 30th anniversary of her passing, the Dorothy Molter Museum will be hosting special events during the Ely Winter Festival in February 2017 including a winter activity day, annual fundraising dinner, bird feeder building contest, museum tours and the first annual Dorothy Molter Memorial Snowmobile Ride (not into the BWCAW though). More information