How many sites and/or museums have you visited that specifically focus on women in history? If you have visited the Dorothy Molter Museum, congrats! Although Dorothy Molter was a woman in history – specifically, Minnesota history and, more specifically, northeastern Minnesota history – it is not just about the fact that Dorothy was a woman. Her choices in life, accomplishments and challenges met are a strong message about independence and perseverance in the face of adversity to all those who choose to listen to her story, regardless of her gender. However, the fact that she was a woman IS important for many reasons, including those aforementioned.

In some ways, Dorothy was a woman “ahead of her time” in the choices she made: graduated high school, went on to nursing school and graduated, visited a wilderness fishing resort and ended up working at it for long periods of time doing physical labor, and never married nor did she ever have children. These choices may not seem out of the ordinary for the “modern woman” but considering these choices were made in the face of standard societal expectations for women to do the opposite speak volumes for the independent woman Dorothy was. Yes, social and political changes were in motion during Dorothy’s formative years (women’s suffrage, the “roaring twenties,” WWII) but, it still took a determined and confident personality to “go against the grain” and do so without a care for what others thought of them – as it still does today. 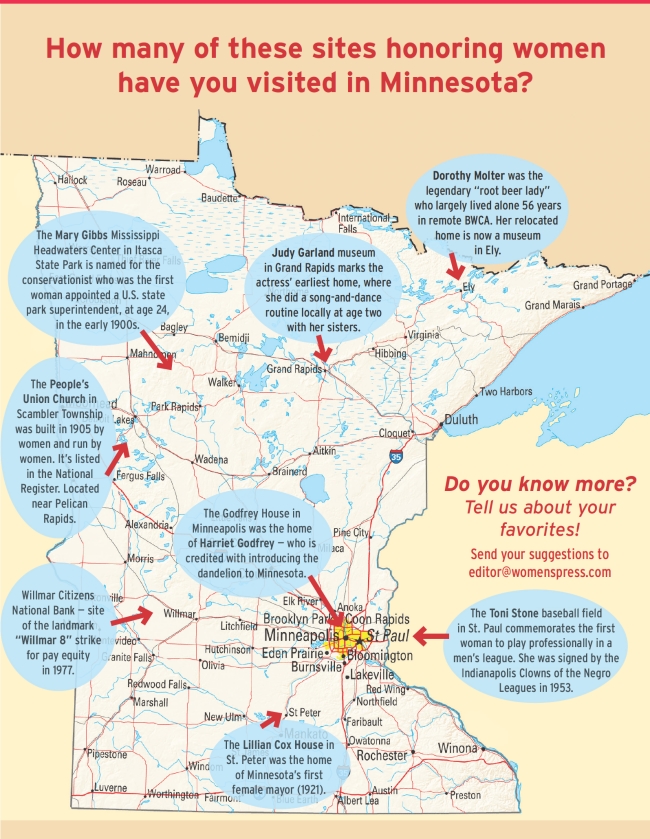 Highlighting women in our history as Minnesotans, Americans and world citizens doesn’t mean the male figures of history don’t deserve attention, but let’s be real, when we look at our high school (even college) history textbooks [in the U.S.], do we see a 1:1 ratio of male to female examples of historic figures? Rarely, if at all. That is not because there were fewer women causing change, inventing things or achieving great accomplishments…

So, let’s take a few minutes to focus our learning on some of the women in our history that HAVE been recognized here in Minnesota.

The August 2016 issue of the MN Women’s Press published a graphic on sites honoring women in Minnesota. You are officially invited to visit these sites (either physically or virtually) and perhaps learn a bit more about notable women in Minnesota’s (and the United State’s) history.

The “Willmar 8” Strike for Equal Pay

Writer’s note:
I found in surprisingly difficult to find any information on most of these women using the internet. In an age where information is typically seconds away via Google, I was at a loss for [reputable] resources to point you to for each woman listed above. I mean, come on, MN’S FIRST FEMALE MAYOR doesn’t even have a bio somewhere??