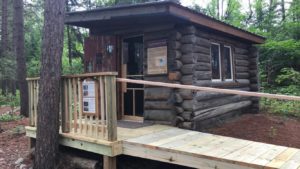 What comes to mind when you think of the Boundary Waters Canoe Area Wilderness? A map? A special lake? Perhaps a moose? What about a cross-cut saw? A typewriter? A parking meter?

In a new exhibit detailing the decades-long, often controversial process of how the BWCAW came to be, the Museum is highlighting some not-so-often-seen collection items that aren’t often associated with the Boundary Waters.

Housed in the Cady Cabin, preparations for this new exhibit included installing a new entry deck with a ramp for easier access, a screen door to keep the critters and bugs out (as best as possible) and two, glass display cases to hold several objects, some of which are extremely fragile. 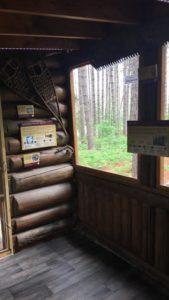 The scope of the exhibit’s timeline extends as far back as 14,000 Before Present (BP), although most of it occurs from 1860 to the present with each of the other 11 panels covering between 10-20 years of history. Each panel includes a synopsis of the time period covered as well as a visual timeline highlighting significant dates in the BWCAW history.

Each panel has one to two corresponding objects that represent a period of time illustrated within the timeline. Separate object cards not only provide collection information for each item but also share a “story” intended to tie the BWCAW history to Dorothy Molter.

Although Dorothy is represented prominently on the object cards, interpretive stories from the perspectives of Knife Lake, Isle of Pines and Bill Berglund, original owner/developer of the Isle of Pines Resort are also included. 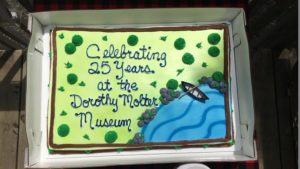 This exhibit has been several years in the making and Museum staff are incredibly excited to have this part of Dorothy’s history featured as a new attraction for visitors this season. It will be an excellent teaching tool for those not as familiar with the origins of the BWCAW as well as utilize collection items that have not been out of storage for several years.

Creating the Boundary Waters: 25 Objects, 25 Stories was made possible by a grant from the MN Department of Iron Range Resources and Rehabilitation and an anonymous matching donation.