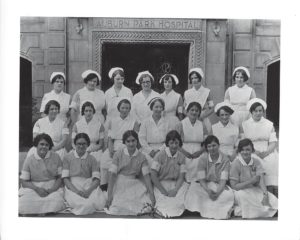 As a young woman in the late-1920s, Dorothy Molter was expected to fit into the predominant traditional gender role of her time for a high school graduate, getting married and starting a family. However, Dorothy was never one to fit into society’s molds for women.

Dorothy was a good student and was very active in sports (volleyball, basketball, tennis and swimming teams). One competitive team she participated on was the girl’s intramural rifle shooting team as there were no girl’s school sports teams at this time. She won the Chicago citywide championship in 1924. This was a skill that came in handy later in life. 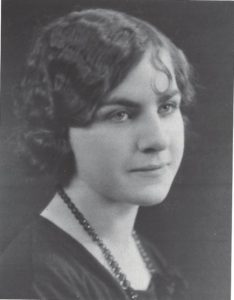 After high school, Dorothy attended nursing school at Auburn Park Hospital (located at 78th Place, between Normal Ave and Eggleson Ave) in Chicago, IL. Based on Dorothy’s nursing school scrapbook she was fond of the doctors, nurses and fellow students in the program. Photos, newspaper clippings and mementos show how much this time in school meant to her.

On a school break in 1930, she accompanied her step-mother, father, uncle and one of her father’s co-workers on a fishing trip to northeastern MN and immediately fell in love with the Northwoods. The party stayed at the Isle of Pines on Knife Lake, a rustic fishing camp built (1920s) and owned by Bill Berglund.

Dorothy graduated nursing school that fall (September 1930), during the height of the great depression, which made it difficult to secure full-time work in Chicago. After she passed her nursing board tests July 23 and 24, 1931, she returned to Knife Lake over the next several summers to work at the Isle of Pines camp. In 1934, Bill asked her if she would like to stay on a more permanent basis and work for him. Dorothy jumped at the chance. 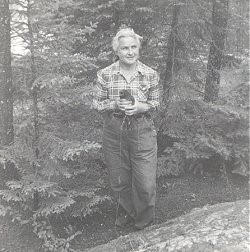 Dorothy with Vera, the Crow, who she nursed back to health

Bill was 33 years Dorothy’s senior and suffered from diabetes and heart-related health problems. Dorothy provided the much-needed assistance to run the camp. Bill promised her that upon his death, she would inherit the property.

Many people in the region knew of Dorothy because of her root beer, but just as many knew her for her kindness, generosity and willingness to help others. Her training as a nurse was widely known amongst travelers to the wilderness and her location was pointed out on maps by outfitters to their vacationing clients heading into the lake country.

Over the years, Dorothy would ensure that her nursing skills stayed sharp and in compliance with current training requirements. She would often take time to recertify in any training during her annual visits to Chicago over the Christmas holiday.

She would administer to many, many visitors who were in need of first aid, including tending to wildlife such as Vera the crow pictured here with Dorothy on the Isle of Pines of Knife Lake. Despite her geographic isolation, Dorothy gradually became one of the most celebrated and well-known residents of the Northwoods and often referred to as the “Nightingale of the Wilderness.”

Dorothy was always concerned with the physical well-being of others and gave freely of her medical knowledge to all who came her way.  As a way to give back to the community that supported Dorothy, the Dorothy Molter Memorial Foundation (Dorothy Molter Museum) will award one scholarship per year up to $1,000.00 from the Wilderness First Responders’ Fund. This scholarship is funded by contributions made from staff, board, volunteers, members and guests of the Dorothy Molter Museum. Scholarship availability will be promoted to Ely Area residents interested in enhancing their medical expertise in the following ways: