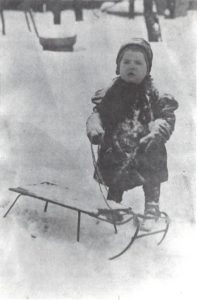 Dorothy as a toddler

Dorothy Louise Molter was born May 6th, 1907, in Arnold, Pennsylvania. Dorothy was one of six children born to Mattie and John “Cap” Molter. Dorothy’s mother, Mattie, passed away when Dorothy was seven. The children were placed in an orphanage in Cincinnati until “Cap” remarried in 1919 and moved to Chicago, at which time he reunited the family.

Dorothy was a good student and was very active in sports (volleyball, basketball, tennis and swimming teams). One competitive team she participated on was the girl’s intramural rifle shooting team (there were no girl’s school sports teams at this time). She won the Chicago citywide championship in 1924. This was a skill that came in handy later in life.

Dorothy’s path didn’t follow that of the traditional gender role of her time. When she graduated high school in 1927, she chose to attend nursing school rather than get married, settle down and have children, which was expected of women of that time. 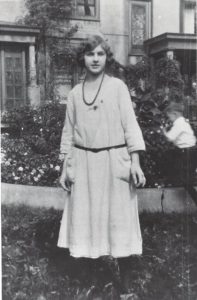 Dorothy as a teenager

Dorothy was 23 when she first visited Knife Lake in the Superior National Forest north of Ely, Minnesota, in 1930. She came to stay on a more regular basis in 1934 to help Bill Berglund who owned and operated the Isle of Pines Resort. Dorothy spent a lot of her time there, returning a portion of some winters to the Chicago area to pick up holiday hospital shifts for extra income and to maintain her nursing certification.

An independent thinker from early on, when given the opportunity to stay and work at the resort full-time, she again flouted conventions, even at the disapproval of her family. When Bill passed away in 1948, Dorothy became the owner of the resort.

She operated the Isle of Pines Resort from 1948 until her death in 1986. Many people in the region knew of Dorothy because of her root beer, but just as many knew her for her kindness, generosity and willingness to help others.   Her training as a nurse was widely known amongst travelers to the wilderness and her location was pointed out on maps by outfitters to their vacationing clients heading into the lake country.  To many, she was known as the “Nightingale of the Wilderness.”  Despite her geographic isolation, Dorothy gradually became one of the most celebrated and well-known residents of the Northwoods. 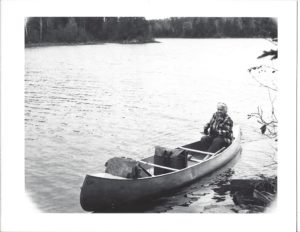 Dorothy was a model of independent thinking, and her story encourages us to think for ourselves. Today, we can look back at how the sociopolitical history of America during Dorothy’s lifetime influenced and challenged Dorothy’s own path in life and imagine her as a person, rather simply an historic figure.

The transition from the Victorian Era at the turn of the 20th century, women’s suffrage, two world wars, and women’s employment were only a few of the profound points of reference on Dorothy’s timeline – no doubt significantly affecting her as a woman living through those changing times. She once said “if I can ever find a man who can portage heavier loads, chop more wood, or catch more fish, then I’ll marry him.” Apparently no man ever met her criteria.

It is a part of Dorothy’s story that isn’t emphasized as much as the physical life she had on Knife Lake, but understanding this part of the story, the development of Dorothy as a strong, independent woman, gives new life and relevance to it today.

This is especially true for young women who visit the Dorothy Molter Museum; her legacy encourages them to follow their own path even if it’s not what others would choose for them.

Learn more about Dorothy Molter through the lens of those who knew her. Download the transcripts of 10 oral histories from friends of Dorothy’s.