Remembering the Ride? Join ours!

Home/Blog/Remembering the Ride? Join ours!
­
Previous Next

Remembering the Ride? Join ours! 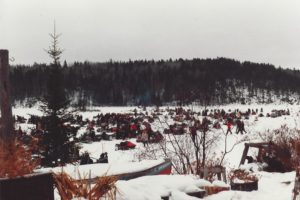 Participants at the Memorial Ride, January 10, 1987

January 10, 2017 marked the 30th anniversary of the legendary Memorial Snowmobile Ride up to the Isle of Pines on Knife Lake. On that day, the US Forest Service (USFS) issued a pass for upwards of 1,000 mourners to travel by motorized transport into the heart of the Boundary Waters Canoe Area Wilderness (BWCAW) to remember the Root Beer Lady.
After Dorothy’s death on December 18, 1986, a formal memorial service was held in Midlothian, Illinois the week after and was largely a family gathering, so not many of Dorothy’s friends from Ely and Moose Lake were able to attend.  For those who wanted to celebrate her life in the Ely Area, it was suggested that a service be held at Dorothy’s place on Knife Lake.

The use of snowmobiles in the BWCAW had been banned nearly two years prior making a trip up to Knife Lake for a service nearly impossible without them. A group of Ely locals, spearheaded by John and Peg Rosett, dear friends of Dorothy’s, requested that the USFS lift the snowmobile ban for just one day in order to venerate this  great woman.  Public support for this mission was so great that the USFS deviated from protocol and allowed the event.

A wilderness setting at Knife Lake will provide the background for a memorial service honoring the life of Dorothy Molter, the last resident of the BWCA who passed away at her remote island home in December. The special service will be held on Saturday, January 10th at 1pm at the Molter cabin northeast of Ely. Special authorization has been given by the USFS to allow snowmobile access to the BWCA Wilderness to the event. An access trail has been marked starting at the Moose Lake landing on the Fernberg Road and at Saganaga landing on the Gunflint side. The snowmobile authorization applies only to the marked trail between the hours of 9am and 4pm on the 10th with no allowance for side trips.
Official USFS Press Release 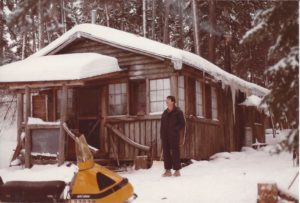 Once there, hundreds of people gathered to share stories about their relationship to Dorothy: visits with Dorothy over coffee, adventures they experienced in the BWCA on their way up, mishaps that required Dorothy’s expert nursing care, the way her root beer always quenched their thirst even when it didn’t have time to ferment quite long enough…

They walked through the cabins one last time and we served donuts and coffee outside just as if she were there. A special memorial service was held by her cabin with people standing down below, very reverently on the ice.
Peg Rosett

The gathered crowd listened to a poem by St. Augustine about the beauty of creation and recited a prayer, they held a moment of silence.

This is the beauty that Dorothy knew so intimately. This is the beauty in which Dorothy died. She lived as she wanted to live. She lived the life God ordained for her. Her spirit will continue to live on in the memory of those who knew her.
Rev. Vince Gallinati, St. Anthony’s Catholic Church, Ely

Would you like to join us for our 30th anniversary Dorothy Molter Memorial Ride on Saturday, February 11?

Please RSVP if you plan to attend so we may contact you in case of cancellation.